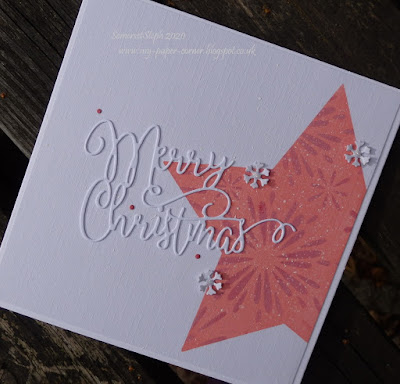 October's CAS Mix Up card challenge has a rotation of us using stencils this month with a prompt of tone on tone. I die cut a large star from a stencil sheet, placed it on the edge of my textured cardstock and brushed over abandoned coral DO.  Keeping that stencil taped down I placed over a fireworks stencil from Funky Fossil which I've inked with fired brick DO as I thought the design would work as a snowflakes pattern.  I did splatter the area with white gesso just to add some interest otherwise it seemed too flat.
Added a very fine die cut festive sentiment and small die cut snowflakes which have some stickles/art glitter in the centre.  Finishing touch ... three small coloured dots around the sentiment to help focus your eye ... I'm definitely getting more comfortable about leaving open/white space now 😊.
I've used - 13.5 cm sq white card base Linen structure white cardstock Stix2 die cut stencil sheet Funky Fossil Fireworks stencil Creative Dies star die DOs - abandoned …
12 comments
Read more 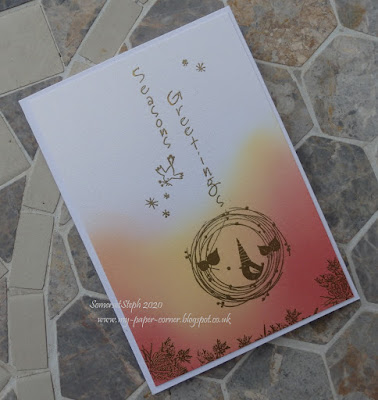 A quick post with a card for two challenges CAS Christmas Card where October's theme is Christmas Birds and Christmas 24 #019 Winter Birds.  My quirky bird has his festive hat on and there's a little dove flying down with a sprig of olive.
A couple of distress oxides inks were blended on a piece of pearlised white card, over stamped and heat embossed with gold EP.  The panel buffs up to a lovely shine afterwards and is adhered to a white card base.  Despite using an anti static bag I've still got specks of gold EP especially around my sentiment which finally disintegrated on me having succumbed to hot summer temperatures.  Hey-ho ... it was old and I had been nursing it along as I liked that it read vertically.
Photographs taken on a wet showery day so no shine captured I'm afraid.
I've used - A6 white card base Pearlised white card from stash Distress Oxides - fired brick, squeezed lemonade Craft Stamper cover mount quirky bird & foliage stamps Papermania dove & s…
12 comments
Read more 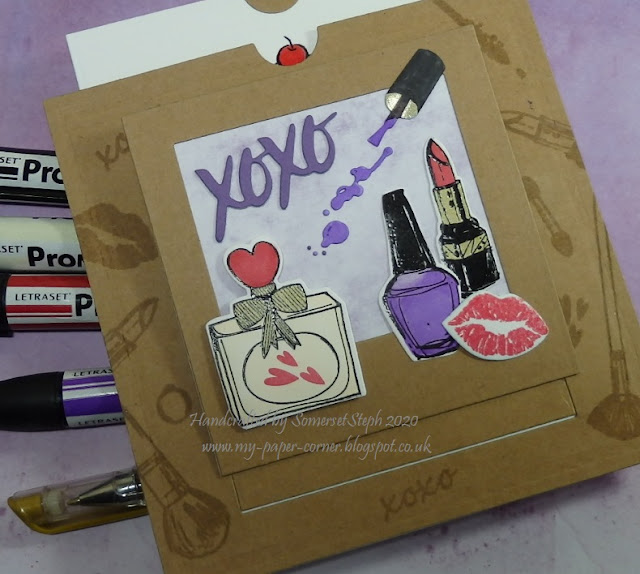 A while back I was lucky enough to win two Made to Surprise Super Sliders Collection die sets designed by Sam Calcott and a co-ordinating make-up stamp set from Craft Stash during a live demo on CraftWorld by Sam as she was launching her new range.  It's taken me a long time to complete this as I had several other projects on the go already and this set took me right out of my comfort zone as I rarely make feminine girly cards!

I do love the pop up slider style and made the base from kraft card over stamping with VersaMark ink for a watermark effect.
Some of the stamped make up items (coloured with promarkers) were arranged on the centre pop up section (perfume bottle raised on foam pads, nail polish, lipstick and lips shaped and adhered with silicone gel).  These stamps have co-ordinating dies so no fussy cutting!  Added a few die cuts above - the purple marbled card I've had in my stash for years.  Finishing touches with some gold gel pen highlights for even more sophisticatio…
7 comments
Read more 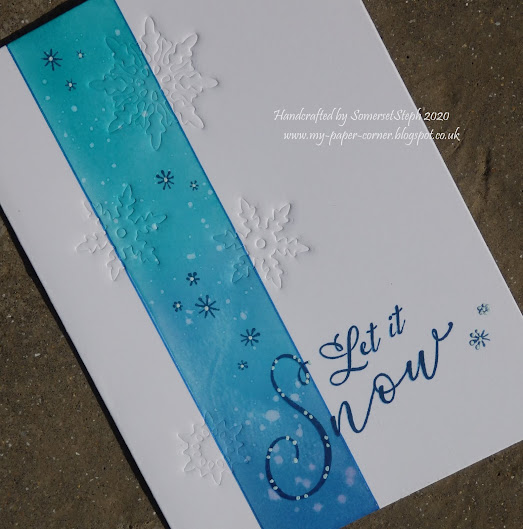 Crafting has been a bit hit and miss for me of late as family life has just got in the way but at last a Christmas card made for two challenges, a late entry for September's CAS Mix Up and a new colour challenge that has caught my interest called Color Hues.

I masked off a panel on the front of my card base and blended a mix of blue inks to create an ombre effect from turquoise to navy with a few splatters of water to add interest and lift some of the ink.  I've not embossed with dies very much so had to hunt where I had written down the sandwich for my Big Shot!  I'd forgotten how little pressure was needed to get a lovely embossed impression.  I chose a few snowflake dies and positioned them partly on/off my inked panel to widen the overall design then stamped the gorgeous sentiment at the bottom (I do love this flowing font) and a few falling little snowflakes all in navy blue. 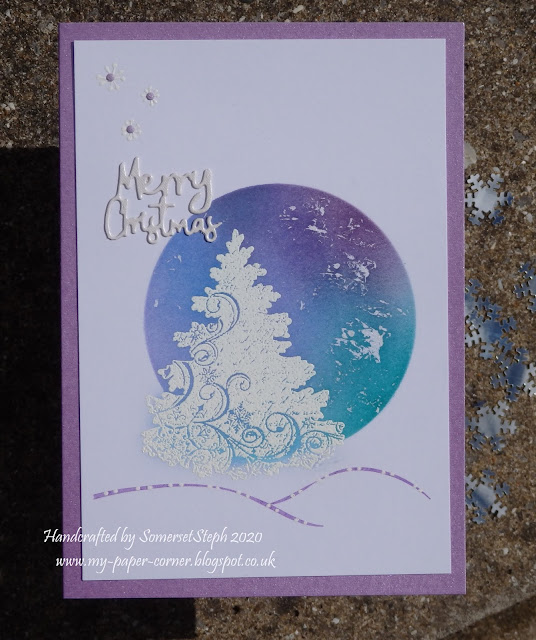 Excited to be sharing my guest designer card for September's CAS Christmas card challenge where this month's theme is Christmas Tree.  I was their winning card in July, you can see it here.
I reached for my all time favourite Christmas tree stamp from an enchanted Christmas set by Hot off the Press.  A solid stamp with a lovely flourish design and snowflakes as part of the tree itself.  First I heat embossed the tree with white EP then positioned a circle stencil partly over so I could dab using cling film some pearl effects before sponging with distress inks to create a snowy sky backdrop.  Both the tree and pearl effects act as a resist and buff up to a lovely shine. I've ended up with a contemporary colour palette with an emphasis on lighter shades of purple with touches of blue and turquoise as the three DIs were still out on my desk from a previous project so I just went with them.  Finishing touches are three stamped and embossed snowflakes with coloured dot centres, d…
25 comments
Read more 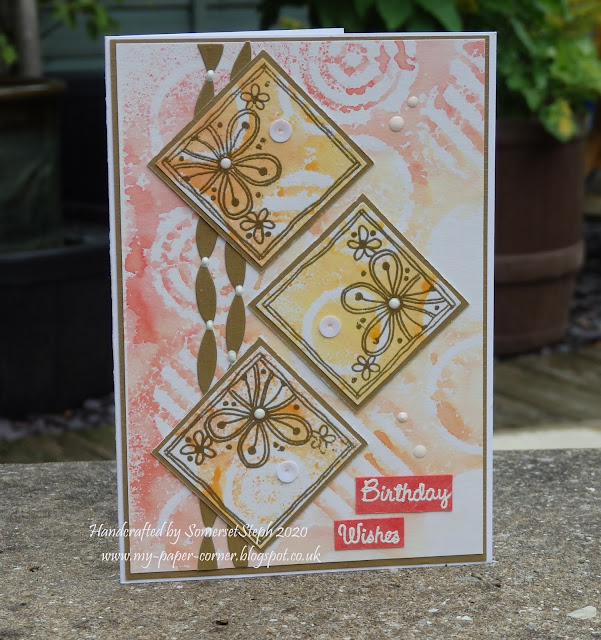 A few months back I was experimenting spraying brushos over/through a stencil then took a print off the stencil with what ink was left behind.  This card uses the stencil print which is a more delicate and softer result.  Used a Papermania geometric circles stencil with scarlet & yellow brushos mixed in mister bottles.

One of the floral frames from Julie Hickey's set was stamped and embossed with gold EP on part of the stencil print where the colour was more orange/yellow and cut into squares.  I used the more red/pink part for my base layer.  Matted everything on gold card and also cut two ribbon strips.  The layout follows Freshly Made Sketches #229 from 2016 which I happened to come across on Pinterest.
Added some enamel accents, sequins and a white embossed sentiment on red card as finishing touches.
I've used - A6 white card base Papermania geometric circles stencil Scarlet & yellow Brushos Julie Hickey Floral Frames stamp Elizabeth Craft Ribbons & Jewels die Ranger G…
8 comments
Read more 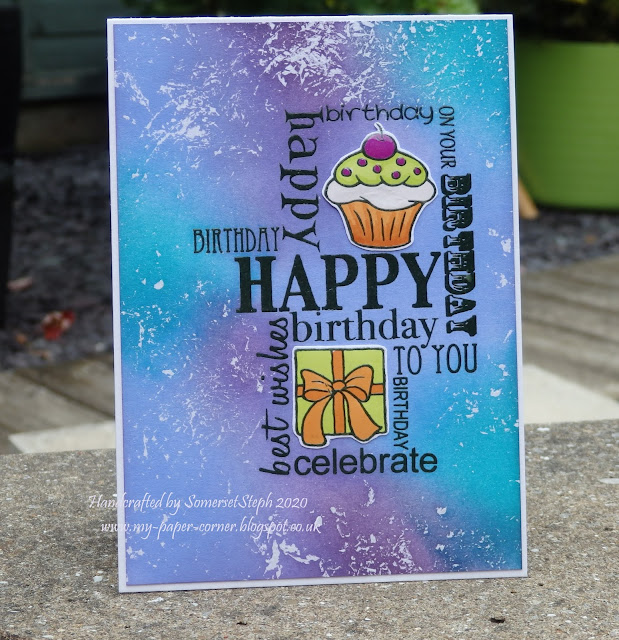 I've been creating with Jane Gill's Woodware Birthday Grid stamp set.  Started by stamping and embossing the sentiment grid then with some scrunched up cling film I lightly dabbed some pearl effects around the edges, once dry blended three colours of distress inks to create my speckled background.  Both the embossed sentiments and pearl effects act as a resist and buff up to a lovely shine once the inks are dry.

The stamp set comes with elements that can fit inside or around the sentiment grid design.  I chose the cupcake and gift both coloured with promarkers, fussy cut, shaped and adhered with silicone glue.  Added glossy accents on the cherry & decorations.  This is only the second card I've made using this stamp set, the first one you can see here, both totally different.

StephW
Most crafters will know me as SomersetSteph on docrafts where I first uploaded a card to my gallery there in July 2006. Love stamping & all the different techniques that go with it but I also enjoy Quilling and have been to Calligraphy & Parchment evening classes too. Love taking part in challenges so decided to start a blog in Jan 2018 so I can enter some online ones too.